Despite waiting 38 years or so to "get it together", as they used to say, Mr. Matthew Fischer, one time organist in the Procul Harum band, has won his copyright lawsuit in the House of Lords.

Read all about it from the IP-Kat, here.

Here's the happy copyright claimant, a good Bach imitator, as per the BBC: 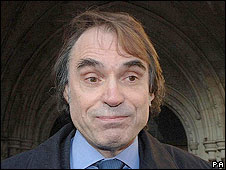 One wonders what Mr. Fischer has been up to for so long. Perhaps some litigation is better never than late? Their Lordships evidently don't agree.

In Canada, we have, for better or worse, a three year limitation period on copyright infringement actions. A lawsuit such as this in Canada would be clearly beyond the pale.

However, in all seriousness, this decision should be studied carefully in Canada for what it has to say about joint ownership and authorship, the implied assignment issue, the recording contract issue, and the laches, estoppel and acquiescence issue.

BTW, as Warwick Rothnie points out, this is the last IP judgment we will see from their Lordships as such, who now have a new new building and and a new name, namely the Supreme Court of the United Kingdom.

It will be interesting to see who else resurrects claims from the mists of time in the UK.

"Whodunit" and "when whodunit dunit" could take on a whole new meaning in UK copyright law...

PS - here's a music video of the classic song "A Whiter Shade of Pale" - complete with organ solo that gave rise to all the fuss. Who knows how long this link will last...