The York University v. Access Copyright Case: Reflections and What Lies Ahead

Prof. Ariel Katz and I were joint keynote speakers at the recent ABC Copyright Conference that took place virtually at Western University May 25-27, 2022. We spoke about the changes in the copyright landscape over the past decade, the challenges that lie ahead, and how to respond to them.

Last year, the Supreme Court of Canada (“SCC”) delivered its unanimous landmark decision, per Abella, J., in the case of York University v. Canadian Copyright Licensing Agency (Access Copyright), 2021 SCC 32 (CanLII).   The SCC agreed with the intervention I made on behalf of the Canadian Association of Research Libraries and with Prof. Katz’s intervention (together with Authors Alliance) as presented by Sana Halwani and ruled that:

·         Nonetheless, there were serious errors in the Courts below noted concerning their pronouncements about fair dealing, e.g. re “aggregate” copying.

Ariel and I have had a lot to say about the York University case and its lead up over the last 11 years or so, as documented in our various many blogs. Ariel’s brilliant “Spectre I”  and “Spectre II” papers have been very influential in the outcome and were cited by the SCC, along with my own 1999 paper about an alternative collective to Access Copyright.

The educational sector can and must resist this lobbying and prevent the unravelling of their victory by lobbyists and by lies.

This is a winnable fight because several truths support the educational sector’s position and practices:

So, Ariel and I were honored to present our keynote talks at ABC which are available here:

These slide shows contain multiple useful links in support of the above.

Thank you to ABC for the opportunity to make this presentation.

Posted by Howard Knopf at 5:12 pm No comments:

WIPO Broadcasting Treaty: Could - or Should - Canada Make a Difference? 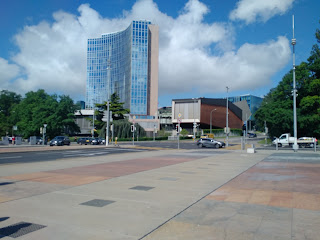 The idea of a Broadcasting Treaty has been kicking around at WIPO  for almost 25 years. I have frankly always regarded it as a solution in search of a problem. As always, my views here are purely personal.

The 42nd (yes – forty second) Standing Committee on Copyright and Related Rights (“SCCR”) meeting is about to take place in Geneva from May 9-13, 2022. The eminent authority Bernt Hugenholtz aptly calls this “Groundhog Day in Geneva” in a paper that is a must read.

The architecture of broadcasting, transmission, retransmission, and just about everything  concerning the internet itself has changed in countless ways since 1996.

Yes – there has been some “piracy” since then, depending upon how “piracy” is defined by increasingly aggressive copyright litigants and increasingly receptive maximalist courts. But there has been no crisis. Broadcasters, transmitters, retransmitters, content owners and various intermediaries are doing better than ever, and vertical and horizontal integration continue to converge power in the hands of fewer and fewer and ever more internally conflicted entities. None of these converged powers any longer are remotely proxies for the interests of educators, scholars, students, libraries and billions of consumers who are paying more, getting less, and seeing increasing government control over all of this.

Here is the latest draft text of the proposed treaty.

It appears that the Canadian delegation attending in Geneva next week will be:

It is understood. but not readily understandable, that the Innovation, Sciences & Economic Development department (formerly Industry and formerly Consumer & Corporate Affairs) (“ISED”) will be involved only virtually. The absence of ISED from personal attendance at an important meeting at WIPO is extraordinary. For decades, ISED had the lead role in international relations. Once upon a time, for several years, I was the “head of delegation” at such WIPO meetings on behalf of the then Consumer & Corporate Affairs Department, as it was called before its rebranding as ISED.  However, ISED now seems sadly to be Missing In Action (“MIA”) in all matters related to copyright, the internet, broadcasting, communications, etc. The Ministers of both ISED and Heritage are both Francophones from Quebec, a “civiliste” Canadian province with varying degrees of nationalist ambitions and separatist tendencies over the years and excessive political influence and where copyright and culture have usually been conflated, elevated and confused well beyond the norms of the common law canon.

One is hearing from various sources that Owen Ripley, who has had a remarkably rapid series of promotions at Canadian Heritage despite some controversy, after which he was actually futher promoted, for being too “chummy” with industry, is being touted by Canada to be the next Chair of the SCCR. This could in turn lead to even greater things – as the current DG of WIPO, Darren Tang can attest. He was chair of the SCCR just prior to his appointment as top official at WIPO.

Mr. Ripley, who was called to the bar only 12 years ago, has been extensively lobbied by “maximalists”,  He had presumably had a leading role in the very controversial recent Canadian Bills C-11 (regulating the internet as broadcasting), C-18 (taxing Google etc. for linking to news media), the forthcoming Online Harms initiative and the inclusion  in the recent 2022 Federal Budget of:

o   Eliminate “education” as a fair dealing purpose – notwithstanding that teaching (including multiple copies for classroom use) has been hardwired into the US Copyright Act since 1976  https://www.law.cornell.edu/uscode/text/17/107

o   Undo the Supreme Court of Canada’s two decisions declaring that Copyright Board tariffs are not mandatory for users – notwithstanding that there are no “mandatory” tariffs or anything remotely equivalent in the USA.

Needless to say, none of this belongs in a “Budget” package – let alone legislation – where it will receive virtually no parliamentary scrutiny. Moreover, the current minority Liberal Government has been immunized from criticism by what is effectively a coalition without benefits with the second so-called opposition party and the lack of any adequate current or likely leadership from the main opposition party.

The maximalist agenda is thriving in Canada. I can frankly not remember any batch of such extreme and unwise bills and policies  in my four decades of involvement or historically at any time before.

If Mr. Ripley becomes the Chair of the SCCR, which obviously would be with blessing of the Canadian government, one can be assured that he would very competently and quickly promote a very maximalist “Broadcasting Organizations Treaty”. This would be welcomed by broadcasters (whatever that term means anymore), content owners, intermediaries and other corporate interests. Not so much by users everywhere. It will be very interesting to see how the developing countries - who are in the majority at WIPO -  line up on this.

PS - as tweeted by @Jamie_Love on May 9, 2022: "WIPO #sccr42 has decided to split the Chair by year. Aziz Dieng from Senegal for 2022. Owen Ripley from Canada for 2023. Peter Labody from Hungary, vice-chair of SCCR 42. It was an unusually contested election, Group B v the Africa group. Still no female SCCR chair."

Posted by Howard Knopf at 9:38 pm No comments: