Damien Riehl and Noah Rubin have released this interesting TEDx talk https://youtu.be/sJtm0MoOgiU entitled “Copyrighting all the melodies to avoid accidental infringement”. It has gotten lots of attention.

Their well-meaning but unconvincing concept is to algorithmically generate every possible melody contained within an octave with no chromatic notes and create a huge database and dedicate it to the public domain.

At the risk of oversimplifying their research and conclusion, this concept frankly seems even more simplistic than the apparently nonsensical "expert" opinions behind some bad court decisions. There are 12 - NOT just 8 - notes in a scale and often more than one octave + rhythm and harmony involved - not to mention the "independent creation" doctrine. They say they are working on including all 12 notes in the scale.

Obviously, songwriters are not likely to succeed in defending an infringement lawsuit simply because a tune may turn out to be found in their limited data base that is substantially similar to the plaintiff’s tune and the allegedly infringing tune. Copyright law doesn’t work that way.

Here are some well known examples that fall outside the simplistic Riehl/Rubin TEDx talk concept:
Indeed, many great tunes contain "accidentals" and may modulate quickly and span octaves.

Sorry for the OK Boomer examples that date back even earlier than my Juilliard School days - but today's so-called tunes are - to the extent that they even include so-called melody - so simple minded that it's no wonder that so many seem the same.

Once upon a time, music really did consist of melody, harmony and rhythm.  It has often been said that Mozart's genius was to start with something apparently very simple and diatonic and to then throw in some chromatic complexity and turn it into extreme genius...

This not only contains some delicious chromaticism but also goes beyond the octave range.

Sometimes some things are just not so simple.

PS - an internationally respected and tenured musicologist friend of mine has pointed out there is more than just the B flat chromaticism in "Do-re-mi": 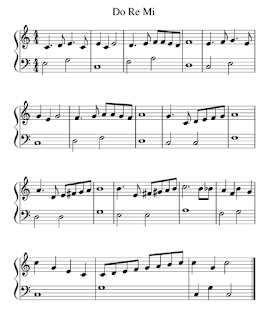 Posted by Howard Knopf at 5:24 pm No comments: