So many IP lawyers have become so enamored of the word "egregious" that, if it were a trademark, it would now be seriously "diluted".

The Oxford English Dictionary tells us that some of its meanings are as follows:

2.2 Remarkable in a good sense: a.2.a Of persons and personal qualities: Distinguished, eminent, excellent, renowned. Obs. (exc. in humorously pedantic use).  b.2.b Of things: Remarkably good or great. Of events and utterances: Striking, significant. ? Obs.  3.3 Remarkable in a bad sense; gross, flagrant, outrageous. [This sense does not belong to L. egregius or to It. egregio; prob. it arose from an ironical use of 2, though our earliest quotations afford no evidence of this.] a.3.a of persons and personal attributes.


It seems to be a bit like another favourite lawyer word, namely "fulsome". In other words, it's potentially very ambiguous and one should use it with great care and not promiscuously. Indeed, the word is not often heard outside of legal circles. For example, I don't know if it is  part of Rush Limbaugh's vocabulary. It probably has too many syllables and is too difficult to spell.

So, speaking of "egregious", Louis Vuitton has just sent what many might consider an "egregious" C&D letter (readers may decide for themselves in which, if any, of the above senses they wish to understand the word) to the Dean of Law at University of Pennsylvania, which is one of the top rated law schools in the USA. The law students at Penn are planning a conference on fashion industry law, and are using an invitation/poster showing a parody of the famous LV pattern interspersed with © and ™ symbols. LV says that this is an"egregious action" and a "serious willful infringement".


LV is an aggressive litigator not only against counterfeiters, which is not controversial. Last year, it obtained an ex parte injunction - later lifted - against the artist Najda Plesner for her "Darfurnica" painting. This was very controversial. Here is a detail of the original. 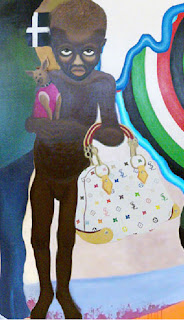 No doubt, this action by Louis Vuitton had the unintended effect of bringing considerable attention to the artist's work.

The author of the LV Penn letter says that he “would have thought that the Penn Intellectual Property Group, and its faculty advisors, would understand the basics of intellectual property law and know better to infringe and dilute the famous trademarks of fashion brands, including the LV Trademarks, for a symposium on fashion law.”

Hmm.  It would indeed be a better world in general if the authors of many "egregious" C&D letters were to “understand the basics of intellectual property law”. And it would also benefit their clients if there were greater awareness of the notorious Streisand Effect.

Anyway, here is the "egregious action" and "serious willful infringement" of which the Penn law students are accused in their invitation/poster:

Penn law has responded here on behalf of its students. The author of the C&D letter has been invited to attend the conference. Perhaps LV will want him to attend. It looks like there will be a good discussion of the "basics of intellectual property law”.