Is the SAC proposed internet music "tax" a stalking horse for SOCAN? 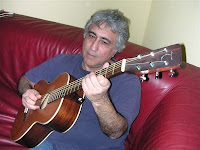 (Above:Upper is Eric Schwartz/Bluepower.com & lower is Eric Baptise/SOCAN)
Eddie Schwartz is renewing his call for a "reasonable monthly licence fee" that would legalize the file sharing of music and "create a new business model that would be fair to consumers and creators alike". Here's his op-ed from July 30, 2010 in Straight.
He says that:

"The revenue received could be distributed to performers, songwriters, and rights-holders on a transparent, pro-rata basis by one of Canada’s respected music collectives, such as SOCAN." (emphasis added)

He is SOCAN's representative in Nashville, a fact which is also stated at the close of the Staight op-ed.
His proposal for a double negative option music "tax" (as it would inevitably be called) on internet users is itself not new. I've written about it before at some length just over a year ago here.
As I said then about the proposed monthly fee of about $5 or so:

This apparently modest fee - less than a pint of draft beer these days - would be added to their ISP bill. It would generate about $900 million a year in Canada, based upon SAC's admittedly “back of the envelope” calculations. (BTW, that’s about 4.5 times more than what SOCAN now collects - and it’s taken SOCAN and its predecessors more than 80 years to get to that level). Sure - SAC admits that $5 is just a figure for discussion purposes and they could cut back to $3 a month - a mere $600 million. Sometimes, you gotta walk before you can run.

It would likely quickly morph into a mandatory "tax", since it's hard to imagine the participation of a sufficient number of internet users and rights owners, even on a supposedly voluntary negative option basis, to enable this unprecedented scheme to begin to function. It would also be in addition to the much disliked "tax" on blank media. The current Government, to its credit, has explicitly resisted efforts to extend this blank media "tax" to iPods and other innovative devices, calling the idea "totally nonsensical". There was no ambiguity in Minister's Moore's famous tweet and Minister Clement's rapid response quoted here.
Eddie is an extremely articulate guy, a great communicator and has always seemed to choose his words carefully. He has been a Director of SOCAN and very influential in promoting the interests of pop songwriters in that organization and elsewhere. I wonder if he is now speaking for SOCAN, or at least acting as a stalking horse?
Earlier this year, SOCAN took the certainly unusual and probably unprecedented step for a Canadian collective of going outside of Canada for its next CEO. It chose Eric Baptiste from France, who has very impressive qualifications, including a 12 year career at the International Confederation of the Societies of Authors and Composers (CISAC), the World Federation of Copyright Societies with 225 member societies in 118 countries, where he had been Director General since 1999. Prior to joining CISAC, he had notable successes in the French broadcasting industry.
One can only assume that the very accomplished, upwardly mobile, and apparently still young M. Baptiste must have been offered a considerable inducement and very interesting challenge to move his career from Paris, France to suburban North York, Toronto, Ontario. On January 19, 2010, SOCAN issued a press release that included the following:

"I am delighted with the selection of Eric as my successor," says André LeBel, CEO, SOCAN. "He has all it takes to take SOCAN to the next level."
(emphasis added)

Could that “next level” be what Eddie is talking about?
HK
Posted by Howard Knopf at 7:41 pm