Obama, the Queen and her new iPod 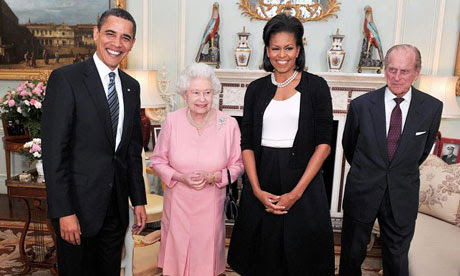 Not long after giving UK Prime Minister Gordon Brown a gift of DVDs that doesn't work due to region coding, President Obama has given Queen Elizabeth an iPod with 40 Broadway tunes that raises some complex questions according to Fred von Lohmann of the EFF. He raises issues concerning first sale, breach of contract and fair use for starters - and that's only under American law.

Of course, no one thinks that copyright owners are going to send lawyers after either President Obama or the Queen over this. But none of us should want a world where even our leaders--much less the rest of us--can't figure out how copyright law operates in their daily lives.

Bill C-61 would have raised these types of questions - and then some. And ordinary Canadian citizens don't have crown immunity.

BTW, the President received a portrait of the Queen and Prince Philip. No batteries to wear out and no legal clouds involved. And likely to last a great deal longer.

The British have much more class than the MPAA and RIAA, both of which must be patting themselves on the back for the recent rather odd gifts from Obama to the UK.