The Penny Perturbation Now In the NY Times

The great Canadian penny perturbation on the part of the Royal Canadian Mint in its efforts to shake down the Municipality of Toronto has made it to the New York Times, complete with a picture:

According to the Times story, the Mint now admits that it has no trade-mark rights in the words "one cent." That's a promising sign of enlightenment and intergovernmental compromise. Or that the mint has regained a minimum modicum of common cents.

But the Mint is still absurdly asserting copyright. Now here's a picture of a 1937 penny copied from eBay for research purposes: 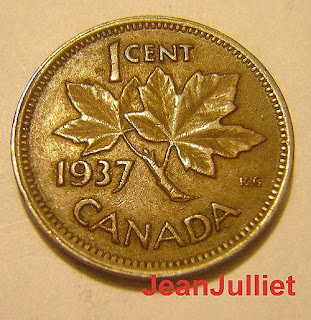 Notice how the two pennies appear to be virtually identical, except for the date. Is the Mint claiming property rights in the date of 2007? (That could only happen in Canada for the year 2010 - but that's another story).

The copyright claim doesn't work. Any copyright expired in 1987, according to s. 12 of the Copyright Act, as I explained in my first posting on this subject.

According to the Mint's spokesman, as quoted in the Times:

“We have to protect our property from abuse,” he said. “We have to be consistent.”

Now how about protecting the Canadian taxpayer from abuse of non-existent IP rights, needless legal expenditures, and the wasting of a lot of peoples' time?