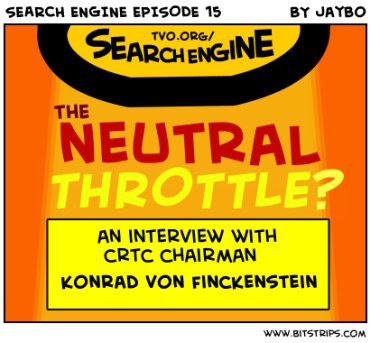 Here is an amazing interview with Konrad von Finckenstein, the Chairman of the CRTC, with Jesse Brown of Search Engine, a remarkable program that was CBC's loss and is TVO's gain.

Mr. von Finckenstein answers Jesse's questions about last week's controversial CRTC Net Neutrality decision - or Indecision as I called it, since it essentially confirms the status quo, puts off the likelihood of any real change by years and shifts the onus on consumers to lay complaints.

I don't have time now to comment on the questions or answers in detail. I hope that there is eventually a transcript published of this.

But this much can be noted. , without any value judgment on my part. It is extremely unusual in Canada - or even the USA or UK - for courts to defend or even explain their own decisions. The decision of a court is expected to speak for itself. Canadian judges rarely speak in public, except on very general issues. They normally avoid any reference to specific cases, especially recent ones and particularly ones that they have been involved in deciding. While the culture involving tribunals may differ somewhat from that of Courts on the issue of “speaking out”, still Mr. von Finckenstein's interview is quite remarkable and unusual in terms of its candour, content and timing.

It is certainly a “must listen” for anyone who cares about the internet or Canadian governance.

HK
PS - gotta love the internet! There's now an obviously unofficial transcript posted by one Bob Jonkman on his blog. Unofficial but helpful. Can't vouch for accuracy but here it is.
And here's an excerpt that's very revealing as to whether we can expect any improvements anytime soon:

08:24 JB: Bell and Rogers, they’ve come out saying that they feel that they’re already in compliance with these rulings. This, this ruling changes nothing, that they say they’re fine with it because they’re already doing what you suggest.

08:35 KvF: I hope, hope that’s true. I hope that’s true. We shall see. You know, if, uh, you, for instance, uh, advanced technological user, and we, let’s assume for argument’s sake you’re a client of Rogers find they’re not, then, then first of all you going to go on the Web site and see who’s the in, uh, apply internet management traffic practices, or have they been, perhaps they’ve been described there, and does it say what the effects of those are. If they aren’t, and you find out they applied them anyway what you going to do? You’re going to launch a complaint and we will look into it. On the other hand, if they are exactly doing what they’re saying, then wonderful, and then we have total compliance, which is the whole idea.