Fair(ey) Use of Obama Photo? 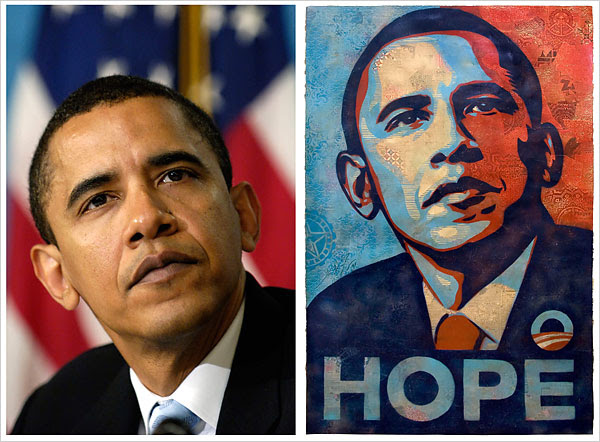 Here's a good article about the preemptive law suit (complaint is accessible through the article) started by Shepard Fairey, the artist of the famous Obama poster that was based on an AP Photo (both shown above). Interestingly, the photographer, Mannie Garcia, says that he and not AP owns the copyright in the photo and he has no problem with Fairey' creation.

"I feel very proud that I made the photograph," Garcia said. "I never would have imagined that it became what it is, and it's pretty cool. The AP is being very aggressive with Fairey, and I don't want to be a part of that. My last conversation with the AP was that I own the copyright, and that's what I'm maintaining."

Mr. Fairey is a very lucky man to have some heavy hitting legal talent behind this claim, including Anthony Falzone of the Stanford Law School Center for Internet and Society and Mark Lemley, renowned Stanford Professor and litigator of important cases.

While the fair use issues are fascinating and important, the interesting short term question from a procedural standpoint will involve AP's reaction, especially in view of the photographer's assertion that AP doesn't even own the copyright.

The NY Times also has a good article here.

PS - it seems that the renowned and/or notorious Mr. Fairey is getting a lot of publicity on other legal fronts, having been prominently arrested in Boston the other day on the way to a major opening of his show at the Institute of Contemporary Art in South Boston. The Boston Globe reports on the kerfuffle, which could be considered pretty impressive performance art.

If, as some say, all publicity is good publicity, then Mr. Fairey is doing exceptionally well.