Did a UK Judge Just "Break the Internet"? Stay Tuned re the TuneIn Decision 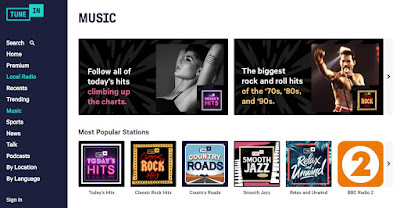 Here is a very long, complex and potentially very important judgement from the UK in Warner v. TuneIn  rendered on November 1, 2019. It is a must read for all copyright lawyers and professors.

The relationship between copyright and the internet is not always an easy one. This case is another example of that tension. It is a test case about infringement of copyright in sound recordings under section 20 of the Copyright, Designs and Patents Act 1988. Section 20 provides for the communication right in UK law. A balance has to be struck between the interests of the copyright owner in protecting its exclusive rights, and the interests of the public in freedom of access to the internet. The claimants say that a finding for the defendant will fatally undermine copyright. The defendant says that a finding for the claimants will break the internet. (highlight added)

Basically, TuneIn is a very sophisticated web site that allows anyone anywhere to “tune in” into more than 100,000 radio stations around the word. Most of them, of course, have licenses in the country where the station is located. But few of them have UK licenses. TuneIn is basically like a magic antenna that links to radio stations everywhere in the world with a lot of useful search and other built in utility. It has ads and a premium version with additional features. Does that sound familiar? It has more than 75 million regular users around the world according to Wikipedia.

12. The internet is international. Users accessing the world wide web from the UK can gain access to websites all over the world. This is routine. However unlike the internet, intellectual property rights are territorial. In what circumstances therefore does an act undertaken on the internet engage the laws, in particular the intellectual property laws, of a given state? The clear answer to that question is that for the rights in an EU member state to be engaged (at least as far as trade marks and copyright are concerned) the act must be targeted at the public in that member state…

He finds that indicia of targeting include the use of the language and currency and ads aimed at individual user’s interests and many other factors including “bespoke advertising aimed at the UK.” However, that is how the internet works. Surely targeting should entail some selective geographical focus – at least for IP enforcement purposes? If everyone and every country everywhere is targeted, can anyone and any country be said to be targeted?

32. The fact that when an internet radio station is indexed by TuneIn and added to its database there is no decision by TuneIn to target the UK with such a stream is irrelevant. Even if the internet radio station actually provided to a UK user was an obscure station from a country on the other side of the world in a language the user did not understand, in which one would not a priori think a UK user would be interested, that is irrelevant. When it is presented to a UK user by TuneIn, from the UK user's perspective it is targeted at them.

There is a lot of discussion of Svensson, GS Media and other EU law that is not directly relevant to Canada – and many references to the “making available” provisions of EU law.

BTW, this judgement was rendered by Mr. Justice Colin Birss, notwithstanding that he didn’t hear the case. The case had been heard by the late Mr. Justice Henry Carr who tragically died before rendering judgment. The parties agreed that they didn’t need to have a new hearing and relied on the record and two days of further oral submissions.

Mr. Justice Birss first came to prominence on the IP scene back in 2012 with his very controversial Red Bus decision, which I discussed here. That decision was rather amusing and arguably rather wrong – but it was the equivalent of a small claims court decision, it had no precedential value, it didn’t break the internet and Justice Birss was soon elevated to the High Court Chancery Division and, as is customary, knighted as Sir Colin Birss.

Can this TuneIn decision break the internet?  With all due respect, quite possibly yes. If not “break”, it may still have the potential to at least cripple it badly.

If TuneIn is viewed as a very sophisticated and specialized search engine that targets ads and is otherwise attuned to its users around the world (a perspective that Justice Birss acknowledges), does that remind anyone of other popular sites, such as, for example, YouTube? Does YouTube have UK licenses for all the music and sound recordings and videos that UK users can access? If this decision works its way into EU law, what about the other countries in the EU? If this decision somehow takes hold outside the UK and EU, what about the other 180 or so members of the WTO?

Above all, it must be remembered that the vast majority if not virtually all of the radio stations accessible via TuneIn are licensed in their home territory. If their ad revenues increase because of their inclusion in TuneIn, their royalty obligations in their home country would presumably increase – certainly so in the case of Canada.

It also appears that radio station providers can exercise some control over whether and how their signals can be accessed via TuneIn – i.e. BBC has apparently blocked UK users from accessing its signal via TuneIn but not other TuneIn users elsewhere.

It is unthinkable that the provider of every radio station that can be accessed though this magic smart antenna called TuneIn should have to be licensed now in the UK – but that seems to be the potential implication.

In Canada, meanwhile, we await the judgment of the Federal Court of Appeal on what “making available” means in this country and in a different context. We also have the Supreme Court’s decision in Crookes v. Newton that indicates that merely linking is not enough to create liability for the content. That was a defamation case but has been generally regarded as applicable to copyright. On the other hand, we have the very problematic result of the Supreme Court of Canada’ decision in Google v. Equustek that, following a frankly baffling argument by Google, imposed upon Google the world wide obligation to take down links to material that allegedly infringed local, unregistered and unproven IP rights.

So – what is potentially at stake is whether there can truly be a “world wide web” (remember that increasingly quaint and anachronistic term) or whether there will be about 180 little geo-blocked territories, each with their own rights clearance regime? Could there be a central efficient automatic system? One can bet that Google and maybe others are thinking about it….

In the meantime, there could be much friction and uncertainty.

There has not yet been a lot of comment on this TuneIn decision – perhaps because it is so recent, long and complex. But, if you will pardon the pun, just stay tuned in.