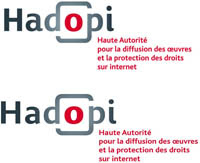 Apparently HADOPI, the "three strikes" anti-infringement creation of French President Sarkozy, whose wife is an entertainer, and the US entertainment industry, has stepped up to the plate with an embarrassing strike one - namely admitted opyright infringement arising out of its launching logo.

Apparently, it was "une erreur de manipulation." French internet users may wish to remember this turn of phrase.

Here's the story in Torrent Freak, with HT to Duncan Bucknell and the IP Kat.