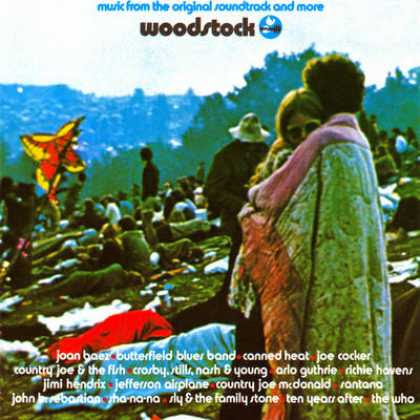 Now that I have your attention about "free love," the NY Times normally brilliant columnist Frank Rich has a column from yesterday on the 40th anniversary of Woodstock, which some of us of a certain age actually remember. Those of us who weren't there may well remember it better than those who were, but that's another story.

As many boomers have noted, Woodstock’s nirvana was a one-of-a-kind, one-weekend wonder anyway, not the utopia of subsequent myth. It wasn’t even meant to be free; in the chaos, the crowds overwhelmed and overran the ticket sellers. That concept of “free” — known to some adults as “theft” — persists today in the downloading of “free” music, which has decimated the recording industry far more effectively than brown acid ever did.

What Mr. Rich forgets, however, is that the Woodstock event and its subsequent ethos resulted in the heyday of big music selling Rock and Roll to countless millions of loyal fans, who bought hundreds of millions or more of fragile vinyl LPs, 45s, 8 tracks and cassettes in the 70's and 80's, and then replaced them all with expensive and not as durable as thought CDs. Now, many of these aging boomers who can figure out how to use P2P have been sued for downloading music that they have paid for several times over already, including live concert attendances in venues where tickets actually were required.

The rest of Mr. Rich's column is very good indeed.

And, BTW, Bill C-61 had some absurdly limited provisions that might have allowed you to transfer that ancient LP, cassette or 8 track, if you could still play it and figure out to transfer it "directly" to your iPod (I don't know if that can even be done), as long you keep the old medium and keep a copyright lawyer in full time residence to advise you on other missteps that most music loving fans would inevitably stumble into during the course of their day.

Thanks to HT Tweet ("HTweet"?) from Susan Delacourt
BTW - full disclosure - I grew up in Woodstock. Woodstock, Ontario that is. Here's the historically best known resident of Woodstock, Ont.